Pakistan is home to 108 peaks above 7,000 m (22,966 ft), and probably as many peaks above 6,000 m (19,685 ft). There is no count of the peaks above 5,000 and 4,000 m. Five of the 14 highest independent peaks in the world (the eight-thousanders) are in Pakistan (four of which lie in the surroundings of Concordia; the confluence of Baltoro Glacier and Godwin Austen Glacier). Most of the highest peaks in Pakistan lie in the Karakoram mountain range (which lies almost entirely in the Gilgit–Baltistan region of Pakistan, and is considered to be a part of the greater Himalayan range) but some peaks above 7,000 m are included in the Himalayan and Hindu Kush ranges. 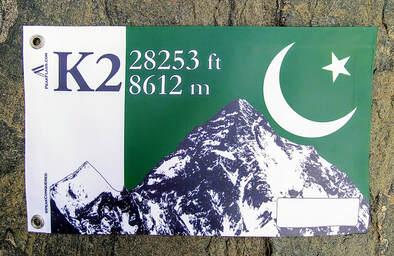 K2 (Urdu: کے ٹو‎, Kai Ṭū), also known as Mount Godwin-Austen or Chhogori (Balti and Urdu: چھوغوری‎, Chinese: 乔戈里峰), at 8612 meters (28253 ft) above sea level, is the second highest mountain in the world, after Mount Everest. K2 is the highest point of the Karakoram range and the highest point in both Pakistan and Xinjiang.